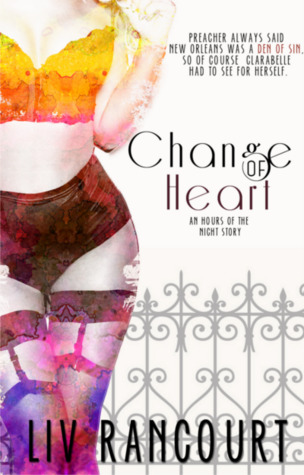 Momma says a body reaps what they sow, and Clarabelle’s planted the seeds of trouble. The year is 1933, and not much else is growing in the Oklahoma dirt. Clarabelle’s gone and fallen in love with her best friend, so she figures it’s time to go out and see the world.

If she’s lucky, she’ll find the kind of girl who’ll kiss her back.

Clarabelle heads for New Orleans, and that’s where she meets Vaughn. Now, Vaughn’s as pretty as can be, but she’s hiding something. When she gets jumped by a pair of hoodlums, Clarabelle comes to her rescue and accidentally discovers her secret. She has to decide whether Vaughn is really the kind of girl for her, and though Clarabelle started out a dirt-farming Okie, Vaughn teaches her just what it means to be a lady.

I have mixed feelings about this story. On the one hand, I loved it. Just from the blurb, you can tell there’s a strong narrative voice. It takes place in 1930s Louisiana, and I really felt that as I was reading. The language, the descriptions, and the world-building all really brought me into the story. The cis protagonist, Clara, is interested in making dresses and sewing, which gave a nice lens through which to see the fashion and lifestyle of that time period. Vaughn, the trans love interest, is confident and has close friends who support her.

So excellent voice, great writing overall. But that brings us to the “other hand,” which is something else you get right from the blurb. This story features violence against a trans woman as a plot device.

I know, I know. It happens. Gritty real life subject, why avoid it in fiction, blah blah blah, any other justification you may want to provide for that. I, personally, just don’t enjoy reading violence against women in any scenario, and when you read as many stories as we do here on the blog, you get really tired of certain tropes. The “cis character forced to confront their feelings upon finding out unexpectedly [often through an act of bullying or other violence] that their love interest is transgender” is one trope we see a lot.

So… yeah. But to the author’s credit, at least it’s clear in the blurb that this is going to happen, and the reader isn’t caught off guard.

Also to the author’s credit, Clara handles it well. There is one instance of misgendering, internally in her thoughts, and she immediately scolds herself and never does it again. I felt like I was holding my breath through the rest of the story after Clara finds out Vaughn is trans, because I was expecting the oh-so-prevalent-in-fiction shit-show that happens when cis MC finds out love interest is trans, but Clara’s internal conflict over it all was minor. She loved Vaughn and stuck with her even when things were rough. That does give the story a bit of a “cis savior” vibe, which is another thing we see a lot in trans fiction, but overall, as trans rep goes, this story is one of the better ones I’ve read. The writing is great, and apart from a couple “ugh, not this trope again” points, it was enjoyable to read and left me feeling good at the end. I had to knock a couple stars off because I really, really dislike violence against women as a plot device.

I liked this book. The writing is good, the MC and her love interest are easy to like and if you’ve read the Hours of the Night series you get a glimpse of Mr. Dupont’s life with Leo. And I really wanted to hit Leo, too, he made me feel furious.
But, that said, there are two things I’m a bit tired of seeing on trans fiction that happened in this book.
The first one is the MC discovering her love interest is trans when she gets hurt and she has to undress her (and this more often than not happens while the trans person is not conscious). I’m not sure if I’m more tired of this one or of the “walking in on an undressed trans person one”.
And second, I would like to see more stories than don’t center how the cis person feels and deals with discovering their partner is trans. It has the potential of being done badly, and end up being hurtful. I don’t think it was the case here, I liked how the Clara kept thinking of Vaughn as female, even if she was shocked. And I liked how she always respected her, and finally came to terms with it. I don’t think her not thinking about it at all would have fit in this story, either. And still, this is something I wish we’d see less of.
All in all, an enjoyable story, but keep in mind is completely told from a cis gaze.