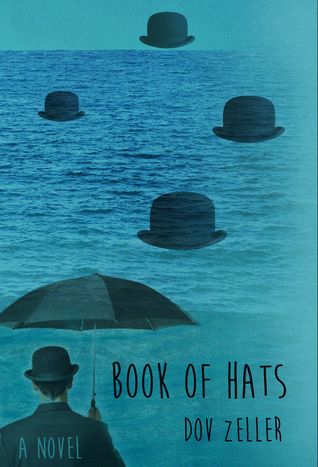 Hats and fashion. Ida Velikowsky’s family has been in the business since biblical times—for so long, they’ve created their own holy book. Centuries of lore carried from continent to continent. An ancient home and a springboard for new beginnings. When Ida studies the book with her father, its magic draws all her worries away. But being a transmasculine kid in a small town in the 1930s puts pressure on Ida, a crushing weight, and she feels responsible as her parents withdraw into themselves and into a room so dark and mysterious, it’s a distant galaxy, a void.

When home life becomes unbearable, Ida escapes to New York where she finds a community of people who accept her as she is. And yet, she often feels a stranger to herself. Her struggles with intimacy will not vanish no matter who she meets or where she travels.

Things take a turn for the surreal after the phone rings late one night in the middle of a dream of hats. Ida dissolves at the sound of her long-lost brother’s voice and emerges wondering if she should agree to take part in a dubious reunion.

This book is a very literary following of the life of a Jewish trans man by the name of Ida, through her life from the 1920s to the 1970s in America. (And yes, Ida uses female pronouns throughout.) There isn’t much in the way of concrete plot. Especially towards the end, the book seems to trail off into madness, rather than having a clearly defined end. For me, the early years of Ida’s life made for a much better reading experience, and I enjoyed the first half of the book much more than the second.

In essence this becomes a slightly grim but ultimately fairly realistic look at queer history in America, via Ida. In some aspects it’s not as grim as you’d think (for example, Ida’s father accepts her for who she is) and in others it’s worse (thank you, rape and child death). But it’s not a happy story. It’s sombre, sometimes chilling, often cold.

But it is exceptionally well written in terms of seeing things through Ida’s perception. For example, as a child she simply refers to her father going away and never notices her mother finally vanish from the house altogether. As an adult, she later works out that they likely both ended up in hospitals or mental institutions, and later on, notes in a very detached manner that they’ve been buried. Another example is her realisation as an adult that she didn’t turn out very different from her parents and brother after all, with the same paralysing bitterness clouding her mind and perceptions of other people and life itself. And like real people, Ida grows up. It’s easy to root for a child who can’t understand why they’re being punished, but it’s much harder to root for the adult who refuses to tell their partner of many years even the smallest details about their history.

Its exploration of queer history and identity is something that’s slightly inaccessible to a non-American, I think, and in the end I’m not really willing to pass judgement on that aspect too much. But it did make for interesting reading.

I wouldn’t say this is a book I enjoyed (which is a weird thing, right, given the rating?) but it’s more that I don’t feel I was necessarily supposed to, much as I didn’t really enjoy reading Of Mice And Men for my sixth form English class. This is a very well written book and felt like an experience rather than just reading a book. If you’re into literary historical novels, I’d suggest giving it a go.

I’m not going to lie, this is probably a textbook case of “it’s not you, it’s me.” I couldn’t connect with this book at all.
At the beginning, I was completely lost. I didn’t know who was who and I had no idea what was happening or how much time was being covered. I thought when I finally got to the main character’s story it would improve but…it didn’t. When I finally started reading Ida’s story I couldn’t connect with her, I couldn’t empathise. And it had nothing to do with her gender or her personality, but with the way she was written.
In fact, my main problem with this book was the writing. And this is where the “it’s not you, it’s me” comes into play. Because I simply couldn’t get into it, and I can’t even explain why. The writing just flew over my head, mostly. I could see things were happening, but I wasn’t invested in either the events or the characters.
This book is 415 pages long, and still it left me feeling as if nothing had happened. Don’t get me wrong, there were a lot of things happening, and Ida was dealt a very shitty hand in life, but I still felt as if I were not moving forward. I don’t really know how to put that into words in a better way.
So in the end, this was pretty much a case of “not for me.”