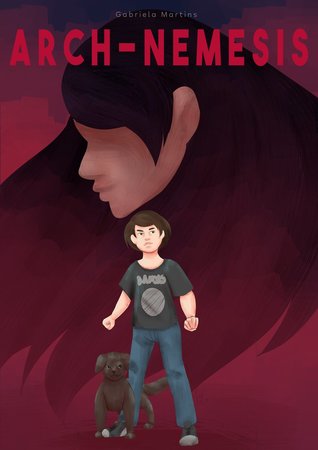 Rodrigo is not very good at being a hero, but he’s convinced that if he catches the speedster who’s been terrorizing the South Brazilian high society and stealing their goods, it’ll be his heroic breakthrough. On top of that, he’s also worried about his grandma coming to live with him and his sister, when the last time they’d seen each other was before Rodrigo’s transition. But it’s okay. He’s got this. He’s totally got this. (Right?)

Add it on Goodreads.

This is a short novella about a Brazilian teenager with superpowers who is on the hunt for a supervillain. Even if he thinks the whole superhero thing is kind of tacky.

When I say short, I mean short—I polished this off in about twenty minutes. But the setting and the characterisation is wonderfully rich in spite of the brevity of the actual story. I could feel Brazil in every inch of it, and I could hear Rodrigo’s temperament in every line. The setting is just great, giving an immersive atmosphere without feeling the need to lecture about Brazilian culture, or turn into a massive “Visit Brazil!” ad. And Rodrigo is a well-developed protagonist, with beliefs and attitudes that are usually very effortlessly reflected in his actions and words, rather than hammered in clumsily. And I won’t offer spoilers, but the ‘antagonist’ is similarly well-written.

My only hang-up is, sadly, the rep. While for the most part I found it fine—it’s incidental, there’s a sweet scene with his grandma apologising for her part in a difficult coming out that felt very real and genuine—there was a moment which gave me pause. Rodrigo is sixteen years old, but has been on T for fourteen months and without needing a psychiatric evaluation. I found that really difficult to believe, and given that my country is currently ridden with pearl-clutching transphobia centred on the false assertion that children are ‘being transed’ and undergoing medical transition under pressure as children, rather than as adults, I twitched at seeing that.

It might be a super small thing for others, and certainly the other parts of his rep I found fine. Maybe this is the part of me that’s exposed to the current thread of UK transphobia all day, every day. For me, it was a scuff mark on an otherwise great reading experience. That said, the rest of this novella is so strong, and I was left with such a desire to see a longer book by this author, it’s still a very solid four stars from me.

This was cute! I’m always looking for stories set other than in the US, so I jumped on this one when I learnt it was set in Brazil – and written by a Brazilian author!
It’s a short read, and I really enjoyed it. It’s one of those books you can simply get lost in for a while and read in one sitting. I love those.
As for the story, I like how Rodrigo is kind of a superhero, but actually isn’t. He fancies himself one, but life gets in the way. Or mostly Bibiana the thief does. I also really liked how Rodrigo’s relationship with his best friend was written. They’d dated for a while, but it didn’t work out because they weren’t in love but loved each other too much. I love that.
The romance, though. It felt like it came out of nowhere, with these two simply being thrown together. It didn’t convince me.
What I loved? Rodrigo being trans, the way it was simply included in the story and how this story wasn’t about him being trans but about him being a (bad) superhero.
It’s a short, cute read, and I recommend you give it a chance!