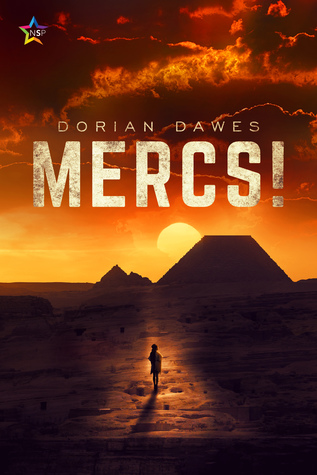 Famous bounty hunter Talisha Artul is not having a good day. A hostile alien planet full of bandits and refugees, an entire group of mercenaries all told to kill her and take her armor, and it’s barely even noon. All she wanted was to earn a paycheck and make her mother proud. They’ve barely shared a kind word since she came out of the closet as trans and took her mother’s name.

Now she’s travelling with an android cowboy with split-personality issues and an eight-foot-tall warrior woman to beat a group of vengeful pirates and the galactic federation’s military forces to uncover an ancient alien temple. Talisha soon learns that despite her legal standing, there is little that separates her from these marginalized cutthroats and outcasts. They’re all victims here, all pawns in their shadowy employer’s game.

Mercs! is a science fiction novel about a group of mercenaries caught in a three-way galactic war between corporations. (Yes. Not countries. Corporations.)

The exclamation point in the title is really on point. The tone of this story reminded me a little of Douglas Adams—a layer of absurdism over the top of what would otherwise be a fairly standard and even recycled plot about the dangers of greed and excess, the horrors of war, and sticking it to the man.

But it’s that layer that makes this story really individual and an enjoyable read. Several of the characters start off almost as caricatures, from the enormous warrior Bluebird to the snivelling company man Snidely. (No, really, that’s his name.) Ironically the character who was most ordinary was also the least likeable. I never really clicked with Talisha, but I liked almost everyone else in the main cast so much!

Individually, anyway. There was a pretty sharp jump from mercenaries having to work together to romances that really didn’t feel organic, and left me very switched off. I must have missed the part where any of them—except Bluebird and Talisha—actually started to like one another? I don’t know, that part felt really flat in an otherwise really cleverly created story.

It’s a hell of an imaginative world, too. It’s gross. It’s ugly. It’s loud and messy and—look, I didn’t like Star Trek TNG, okay? There was too much bleating about how mankind are more enlightened and wonderful now. I’m loving sci-fi again now we’ve pulled away from that, and this book has definitely pulled away from that.

That said, sometimes too far. There’s a message about everyone having multitudes and depth, about even advanced societies backsliding into hate and anger, but…it didn’t hold up so well, because not everybody got to have those shades of grey. Anyone in a corporation setting was evil. Madame Inspector was a psychotic clone; Snidely was a snivelling coward and then jumped to being a power-crazed monster…I don’t know. If you want to acknowledge that everyone has multitudes, it doesn’t make sense that your bad guys are just bad.

But weirdly, I didn’t mind. I still don’t. Because it felt so good to read a genuinely complex novel. To have to focus and work with it instead of passively sit there. Do I agree with all the messages? No. Do I like all the choices made? No. Do I like Talisha? Not really. But did I like the book, the work that went into it, the creativity, the boldness of it?

I haven’t said a word about the trans rep and here’s why: I don’t feel I need to. This is a perfect case of incidental rep. Talisha is trans. That’s it. She just is. It’s crystal clear and spelled out—no JK Rowling nonsense, please—but it’s never the point, never the focus, never a feature. She is. And that’s all. And I have all the time in the world for rep like that.

After seeing that rating, you won’t be surprised when I say I really enjoyed this one. It’s great queer science fiction, a bit irreverent at times, and I loved it.

I didn’t really know what I was getting into when I started reading it. I was a bit confused about the set of characters. They were an unlikely bunch of people, kind of like a band of misfits, and to be completely honest I was surprised by how fast I grow to love them.
There were three characters in particular I really fell for even before they took the reins of the novel: the sentient android Rogers, who loved Westerns so much he was a cowboy, and the bounty hunters Thalisa Artul and Bluebird. They surprised me. They are amazingly well built characters, so much it feels like the could just jump out of the pages and sit down on the sofa to watch TV with you – and I bet Bluebird would love that.
I loved how they also grew to care for each other along the book. Their development felt organic and natural to the storyline.
The other two characters in that band of misfits were a bit weirder, and I really didn’t grow to like them as much. And to be completely honest, I was a bit grossed out by their relationship after one of them had become something like a mutant insect/human hybrid. That scene was *weird*, and it threw me off, because on top of the grossness, I also felt like their feelings had come out of nowhere. There hadn’t been a hint about that anywhere before.
As for the rep, I really love how casual it was. Bluebird is a lesbian and Thalisa is a trans woman, but the story is not about their identities, but about them fighting and mostly trying to get out alive.
We do see a bit more of Thalisa, since she’s the character who has the most weight in the story, but even then, the trans rep is still casual. It’s mostly her talking about being on hormones and transitioning, and even though her relationship with her mother is a bit strained there’s no sob story there.
This was a great queer science fiction adventure that I would definitely recommend!