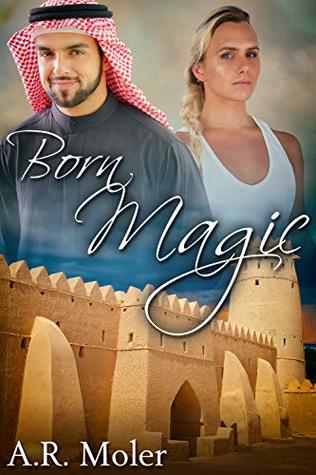 Querteshan guardsman Jamal Fayed is on a routine patrol through the desert area known as the Burning when they discover an injured and unconscious man who looks to be from a nearby country, Perathea. Their two countries have a long history of animosity.

When Nev ran from his master, he was fleeing for his life and any outcome seemed better than the death he was promised. But Nev has secrets, complicated secrets that involve both magic and his physical form. Can he build a relationship with Jamal amidst politics and military dealings?

Born Magic is a fantasy novel wherein a soldier, Jamal, falls in love with a mage, Nev, who escapes slavery in an enemy nation.

The worldbuilding is Middle Eastern in nature, which is a nice departure from the usual north European inspirations for such stories. That said, it was very one-sided in that one nation is bad, backward, sexist, etc and the other wonderful and progressive. But for such a short novella, maybe it’s unfair to want more nuance? I don’t know.

What I do know is that the rep was…uncomfortable. It walks straight into the “trans people aren’t human” trap. Nev was created, not born, and deliberately created intersex to avoid gender bias in his magic. Now, it’s never explained what that is. There’s no other sign of magic being gendered at all, so this didn’t make any sense. Nev is also treated as inhuman—he’s viewed like that by his creator, he sometimes views himself that way, both he and Jamal wonder if he’s human, Jamal at least once refers to him as it, he’s childishly wide-eyed about love and sex…it’s really uncomfortable. Eventually he settles into a bigender identity, but how the story gets us there feels awkward and artificial.

It’s also very…preachy. It bashes you over the head with gender roles being bad and explanations of gender identity…but then there’s a line where Nev says he’s unclean because he’s on his period and Jamal just casually agrees. So it feels forced. It doesn’t feel like that’s their genuine thoughts or how their society really works, it feels like that’s how they *supposed* to think.

I was really excited for a Middle Eastern story and jumped for this the minute I saw the cover but sadly, it didn’t live up to expectations.

I’m not going to lie, I am a bit disappointed with this book. I expected so much more from it, and it barely delivered. One of the very few good things I can say about it is that it was a quick read.
I would have loved to know more of the world it was set in, it looked like a very cool fantasy, but it didn’t really develop into what it could have been. It was too short for that, and everything happened too fast.
Nothing in the plot was surprising, I could see every turn coming with no difficulty. And the romance, again, happened too quickly and felt quite flat to me. I never got a sense of why these two characters liked each other, and the sex scenes were quite awkward, uncomfortable to read, and frankly very unsexy.
As for the rep? We should be doing better than this. We have what by all intents and purposes is an intersex character, but he’s been created by magic, for the benefit of one mage. And I’m like… Could we maybe stop equating trans and intersex characters with inhumanity? We know better, or we should know better by this point.
So, to recap, I’m not keen on the whole intersex = inhuman thing, and I’m disappointed this book wasn’t what it could have been.