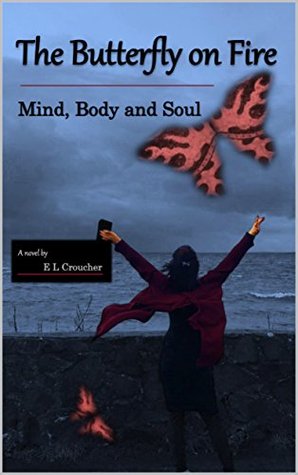 The Butterfly on Fire is the story of three different lives, each linked together by a tragic, unchanging truth.

Eric is growing up and realising how different he is to those around him. How much longer can he hide from himself?

Beam is trying to balance work and romance like everyone else living in London. When embarking on such a journey, anything could happen.

Fubuki is Queen of a magnificent world known as Macha Land, but finds herself struggling to maintain the peace after an innocent man mysteriously dies at one of her Songshows. Will her utopia last with death at her doorstep?

I thought I didn’t have a ton of issues with this book, but then I started writing the review and realized I was wrong. I have significant issues. I’ll just cover the biggest ones.
According to the blurb, the book is about three different people: Eric, Beam, and Fubuki. They’re actually all the same person, I think. Eric is Beam’s deadname, Beam is the main character, and Fubuki is queen of some fantasy world. Actually I read the whole book and I’m still not 100% sure what the connection between Fubuki and Eric/Beam is. I get what it was SUPPOSED to be, but I don’t think it was executed very well. Beam mentions having vivid dreams about Fubuki, so the things in the fantasy world are actually happening… in her head, I think? In her soul? I don’t know.
That said, let’s talk about Fubuki. Fubuki lives in a magical fantasy land called Macha Land, with a well-described geography and magic and is decidedly not earth. But… Her lover’s name is Hikaru. Her horse’s name is Kaze. There’s mention of Japanese clothing and weapons. When she casts spells, SHE SPEAKS JAPANESE. And it is referred to as the “ancient” language. IT’S JAPANESE. If you’re going to make up a fantasy land, don’t steal an existing language and clothing style to pass off your fantasy land as “exotic”. Now, I could MAYBE forgive this if it was all in Beam’s head… Except she doesn’t speak Japanese either. And I don’t know if it all happened in her head. The whole fantasy land/Fubuki thing wasn’t done well enough for me to let something like this slide. If you’re gonna use an existing language in your fantasy land, there has to be a valid reason why they’d be speaking that language. There wasn’t.
The trans rep was okay, and managed to avoid “trans 101” lectures, but GOD was it painful to read. Bullying, violence, assault, self-loathing, self-harm, self-destruction… I understand that some of this is everyday life for trans people, but does that mean EVERY BOOK WITH A TRANS CHARACTER HAS TO INCLUDE IT? NO. We’ve lived through the bullying and assault enough, thanks. Many of us have hurt ourselves because of it. Many others have lost their lives because of it. We get it. Being trans is hard. It is. We know. Every time I read a book with this many instances of violence, bullying, self-harm, and the deep, DEEP, UNYIELDING, destructive self-loathing, I assume it’s written by a cis person for a cis audience. I could be wrong, I know nothing about this author, but it felt very “educate cis people on what it’s like to be trans”. The conflict centered around the main character being trans. Everything kept coming back to her being trans. It is a book ABOUT trans people, not FOR trans people, and I’m getting really tired of seeing this. Can’t we write some books with trans characters just existing? Must they constantly struggle?!
Last but not least, my biggest problem with this book is that a suicide attempt is portrayed as a rebirth. She tries to kill herself and is “reborn” in the hospital stronger and more “herself” than she was before. One of the final chapters portrays Eric/Beam on the verge of unconsciousness/death. Suicide is not a glorious path to self-discovery. You aren’t a fucking phoenix.
Bottom line is, this is a book with an interesting concept that failed in the execution. The writing is juvenile and really needed a good editor (please learn how to punctuate dialog and dialog tags!), and the characters are shallow. There’s too much violence and hate. It was downright painful to read at times. I wouldn’t recommend it, unfortunately.

I have so many critical issues with this book, but let’s start with the most important one. You can literally skip all of the chapters from the Queen Fubuki plot line. As far as fantasy goes, it’s generic, almost Mary-Sue style narrative that is boring, and there’s nothing fresh on this take of fantasy. I have no problem with good description for a character’s outfit if it bears some detail to the story, but the majority of the description is pointlessly showing the character’s “beautiful dress” in some variation. The characters are also just as flat. The Queen has four “defenders”, and I can’t tell you anything about them with the exception that they’re all dumb enough to climb aboard an unarmed ship that aiming to take a magical prisoner with no defenses aside from the magical prince and simple weapons. I was honestly rooting for the sea monster in this scene. Also, the magic system made exactly zero sense. One moment, it’s the staff giving her power, the next she says a simple rhyme, and then, she throws in some Japanese words out of nowhere. Pick a magic system and build your world around it.

As far as the main story of Beam/Fiona, the sequence of the plot is mechanical and plodding. Half of the scenes in the book are Fiona telling the reader what happened, and almost all of them are her being exceptionally good at something she shouldn’t be exceptionally good at. At every point where she gets a chance to be interesting, she simply tells the reader of some triumph. Take for example, she somehow manages to master an entire restaurant in a little over a year with no previous restaurant experience. I’m sorry, but no. That’s not how that works. As a ten year food service veteran, just no. You earn your credibility through literal years of time and honing your skills. Otherwise, she tells us about what happens to her instead of showing us through the actual scenes. It goes back to the very simple lesson about fiction writing of show don’t tell.

Finally, Fiona’s story could have been one of real triumph that centered on her growth as a character, but every time she stands to grow as a person, she either magically is perfect at whatever challenges her or she self-doubts her way out of it. She either runs away from her problems, or they magically disappear. It leaves the reader feeling unsatisfied as there’s no growth for Fiona.