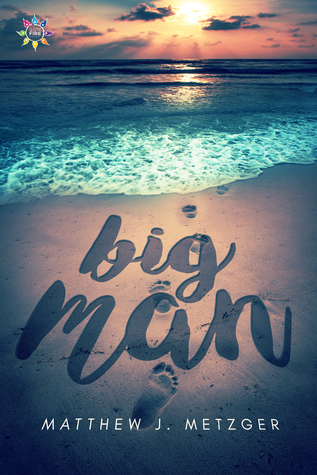 Max Farrier wanted to follow in the family footsteps and join the Navy once, but he’s better off focusing on just surviving his last year of school and going to work in Aunt Donna’s shop once it’s over.

After an incident at school puts Max in the hospital, Aunt Donna’s had enough. She signs him up for private lessons at a Muay Thai gym. Boxing—she says—will change everything.

But it’s not boxing that starts to poke holes in Max’s stupor—it’s his sparring partner. Cian is fifty percent mouth, fifty percent attitude, and isn’t afraid to go toe-to-toe with a bully in the street. Cian takes what he wants, and doesn’t let anyone stand in his way—not even himself.

This book is brutal. Not just the violence, but also the honesty. Big Man depicts the raw, painful, and difficult truths associated with consistent and constant bullying: the depression, the self loathing, the internalization of the things that are used to bully. And it’s hard and it’s painful.

Max Farrier is big. He has had this fact hurled at him for years – been ridiculed for being fat, been given cruel nicknames – and over that time he has accepted that what his tormentors say is true. That he’s just fat and useless. After a particularly brutal bullying incident, his mom’s fiance, Donna, decides it’s time to try a new tactic to help Max, so she signs him up for Muay Thai in the hopes that learning to defend himself will help give him confidence and help him stand up to his bullies. But Muay Thai doesn’t just teach Max how to fight, it also helps him get in better shape.

And it brings Cian into his life. Cian is kind of a mouthy little shit, and he’s definitely good for Max. At school, Max has his bullies and everyone else, and he doesn’t even really have the ‘everyone else’ because of said bullies, so going to Muay Thai and meeting Cian gives Max someone in his life other than his family and the bullies. And Cian genuinely likes Max as a person, a fact that Max takes some time to believe and understand because he’s so used to the bullying and is so deep in his self loathing.

Another thing about Cian is that he’s trans. It was really interesting to read a book from the POV of a cis character meeting a trans character written by a trans author. There isn’t the immediate Trans 101TM you get when cis characters interact with trans characters – Cian just tells Max he’s a boy and that’s the end of it. When Cian gets to know Max better, he does offer to answer questions, but he also makes it clear that there are inappropriate questions and Cian, being Cian, will not tolerate those whatsoever.

Big Man is an honest story about difficult topics, and I’m very glad I read it.

So, let’s just start this out with a simple fact. I’ve never heard of Muy Thai before. After reading Big Man, I’m plotting out how to get running into my schedule again and trying to find classes. I’ve been going through a period where books don’t hold my attention at all, and I finished Big Man in one day.

The character growth of Max is extremely well done. Not once did I feel my internal reader begin to doubt the narrator. He is a very well written character, and his struggles with self-image are relatable and heart breaking. I felt myself rooting for him every step of the way.

The world itself was immersive, and I felt myself drawn into all of the angles of the story. Cian was a great character to play opposite Max and just what he needed as a character. Their dynamic is funny, heart-warming and adorable. Max’s discovery of the person he was meant to be was inspiring. It was great to see a character go from his small dreams in the beginning to realizing he had a whole village of people who knew he could go for bigger dreams. I loved all of the family support he saw in this story too.

I can’t say enough good things about this book. It made me laugh, made me cry, and made me smile the whole way.