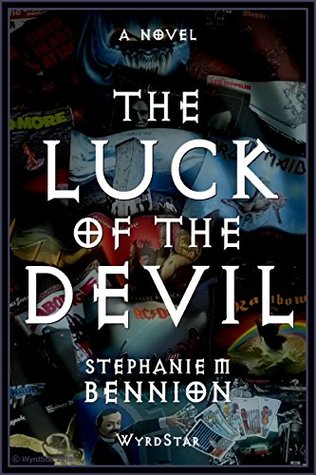 Susan Jones, a transgender woman struggling to get by in the economic woes of 1990s Britain, is under the care of psychiatrist Doctor Mordussen. He in turn is obsessed by her disturbing nightmares. But are her demons real?

An unexpected road trip to Ireland awakens traumas of the past. A seventeenth-century sorcerer, evil nurses, a castle reborn from the ashes and a bloodthirsty sheep do not making getting to the bottom of the mystery any easier. The old wise woman of the village knows more than she’s telling. Susan must confront her demons in more ways than one. Can her love of heavy metal, her battered Volkswagen camper van and two best friends save the day? The Luck Of The Devil is a thriller of both comedy and tragedy, set in a contemporary world of superstition, psychiatry and the metaphysical.

So I’m just going to start with this teensy tiny spoiler: the main character, Susan, sneaks into Hell using an Inland Revenue security pass. And I nearly inhaled my coffee laughing.

I’ve been reading for this blog from the very beginning, and I have never picked a book up like this. And to be honest, I’m not sure I’ve ever picked up a book like this from the cisgender world either. This book is unique.

In a nutshell, Susan discovers that her years of terrible luck and misfortune were at least in part caused by a mysterious stranger—for now—dabbling in black magic. But now the stranger’s deal with the devil is almost up, and Susan has to fight to save her soul. This is set in 1980s Britain and while I couldn’t really tell why, I also never felt like I really needed to know, either. It just is.

So, how did I find a religious trans novel?

I’m from a Catholic family and I usually avoid religious themes in my queer fiction because…well frankly I get enough hellfire and damnation from my aunt, thanks, and I’m not inclined to be forgiving to the Church for all those years of hatred. But this book takes a more…heavy metal approach to the faith that treats it as something true but without actually saying it’s right.

And that was a really well-struck balance. That Susan is transgender counts against her in the eyes of the literal angels and demons in this story, but it not once felt like that was a truth that the reader was supposed to follow. It felt like another weird and stupid thing that Christianity is bogged down with, not at all like a message the author wanted us to believe. So it worked. I could read the transphobia and judgement as a negative thing or an antique curiosity, not as some horrible letter to me through the book. And Susan’s identity is woven so very well throughout. She has been tormented by the health service, because that’s what happens. She is scared that her gender identity and her supposed insanity tie into one another, even as she is personally convinced they are unrelated, because that’s the message mentally ill trans people are fed throughout their lives. There is a casual consistency to her appearance, with neither hand waving what simply can’t be the case (as so often happens in magical passing) nor obsessing about every facet of her looks, transition, lifestyle,
etc etc. There is no infodump moment, but there is also no ambiguity.

And the story itself is great! It’s a powerful plot, very well driven, and very deeply described. Every character has a point and purpose and personality, and Susan herself is a great balance of terrified disbelief and fed-up strength. My sole criticism is that the book is very, very long—but honestly, I loved it the way it was.

If you’ve got a spare few days and a desire to read something really unique and different, I would definitely give this a go.

This would be a very short review if I were allowed to say that this book was too long and leave it at that. But I’m not allowed to do that, so you are going to get some more of my ramblings. I hope that’s not too disappointing.

While I didn’t find any issues when it came to the trans rep, I should warn for some transphobia and misgendering withing the text. Kudos to the author, though, since they didn’t make those things into a plot point or into gratuitious suffering for the main character.

My main problem with this book is that I couldn’t engage with it. I didn’t care about the characters, or about what was happening to them.

It took me a long time to even understand what was happening, and by the time I’d reached the middle of the book I was stil confused. After that point the plot did get to be more interesting for me. But even then, I could have lived without finding out what happened in the end. I rarely abandon books, mostly because my curiosity gets the better of me and I keep reading until I find out what happens, but I kept reading this one and feeling that I could simply stop and I wouldn’t feel an urge to get back to it.

Finally, I didn’t really love the writing. It was too full of adjectives for my taste, the description feeling somewhat cloying. I simply couldn’t engage with it, as I felt like I was being bombarded with adjectives and descriptions. It took me a long time to get to know the main character for herself, but I could describe in detail where she lived and what clothes she wore. It was frustrating.

In the end, I’m aware that most of the things I’ve pointed out in this review are a matter of personal taste. So if you think this is something you may enjoy, I encourage you to pick it up.

One thought on “The Luck of the Devil by Steph Bennion: 6/10 Stars”